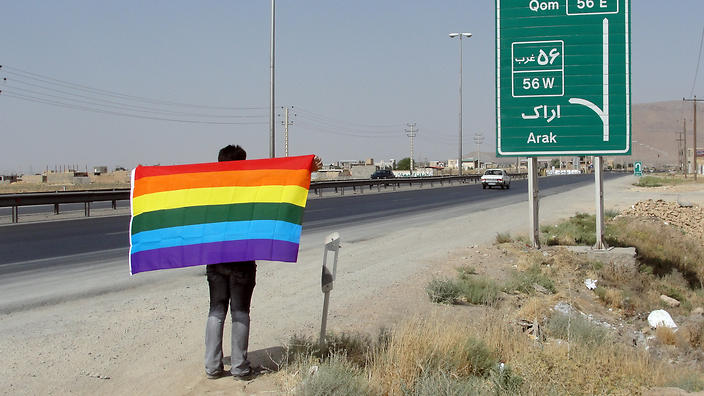 In a country where homosexuality is illegal and punishable by death, Iran’s LGBT+ community will be celebrating Pride in the only way possible—in secret.

Ranginkamaniha or ‘Rainbow Friday’ has been taking place in Iran since 2010 and invites the country’s queer community to upload photos of themselves with rainbow flags, balloons and messages of hope—with their faces obscured for their own safety.

“We are believing in the power of happiness, miracle of hope and the strength of colours, even in this world of superficiality and helplessness,” a statement from Iran Pride reads.

“Our grief is not dimmed, but we, the rainbows of Iran are screaming our happiness as a shape of resistance and we keep our euphoria alive as the torch of justice.”

The statement continues on to detail the severe lack of rights afforded to the LGBT+ community in Iran.

“The right to our own body, the freedom of presence and being proud of who we are, are not only rights of LGBTIQ and marginalised to be gained but the fundamental and basic rights of every human that its absence is very felt.

“For equality and human dignity, with the smile on our lips, and the flame of hope within ourselves, we are going ahead up to the destination… together.”

Iranians to participate in Amsterdam Pride

As well as Rainbow Friday, LGBT+ Iranians in Amsterdam will be taking place in the annual Pride celebrations in the European country.

Amsterdam is the only city to hold its Pride parade on water—with dozens of decorated boats sailing along the Prinsengracht—and this year the ‘Iran Boat’ will sail alongside them, drawing attention to the lack of LGBT+ rights in the Middle Eastern country.

With support from non-profit foundation Joopea, LGBT+ Iranians in Amsterdam will “come out of the closet and prove that we are not ashamed of ourselves and we are proud of who we are,” according to a statement released.

“Homosexuality regarded as a crime punishable by death in Iran and publicly identifying as LGBTIQ puts one at serious risk and just imagine how can be difficult to fight and to advocate for the fundamental rights of LGBTIQs as a queer rights activist inside Iran as we did,” the statement continues.

“We will be marching behalf of the Iranian LGBTIQ community and behalf of everyone who has no voice and no face.

“We will be showing visibility of the hope and the dream. That’s why we are here to make our dream come true.”